Look what Sarah Palin, the twit from Wasilla, has tweeted today! - UPDATE

"The mere idea of someone doctoring the photo of a special needs baby is appalling." --- Meg Stapleton to CNN, June 2009

Sarah Palin fingertips have discovered the "little twittering thing" again. She is currently at the Iron Dog snowmobile race in Alaska, in which Todd takes part, and she reveals her excitement to the world via twitter.

Who knows, maybe Todd will win this time WITHOUT cheating.

Sarah couldn't help herself and sent out this tweet today:

"Trig is a fan" - haha, Sarah, how funny, I cannot stop laughing. You are hilarious!
Now comes the "twitpic" which Sarah has attached:

The attached picture is: A silly photo-montage of Trig!
UPDATE - Here's the original photo: 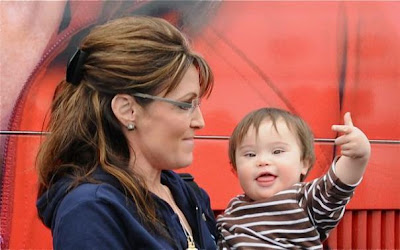 Sarah, please tell me, why isn't that funny?
Don't bother to use your brain cells - I tell you why:
It isn't funny because this is the arrogant and bitchy answer you just gave to Andrea Friedman. Look at Trig, he has a normal life, too! He is a fan!
No, Trig hasn't a normal life. He has a mentally disturbed "mother" who uses him as a prop - again, for the whole world to see.
Instead of giving a reasoned response to the sincere concerns of Andrea, which you haven't done and surely will never do, you just showed her the finger, which is apparently the only response you are mentally capable of.
Did I say that you actually haven't even given birth to Trig...oh, forget it, I just feel sick.
(Our friend EyeOnYou has more details about the photoshopped picture)
.
Posted by Patrick at 01:59