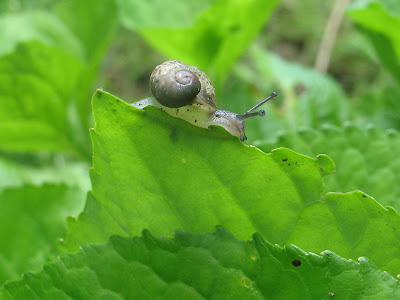 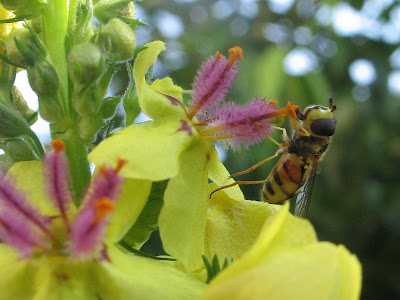 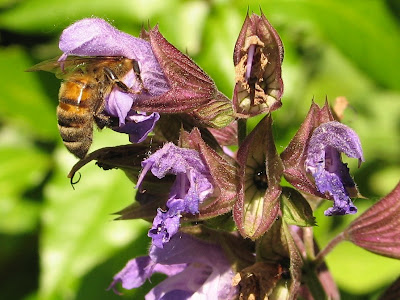 Do you still need photographs for the open thread? (Yes, I do!)

I have included a few I took whilst stalking the things that crawl and fly in my garden during the summer. February is without doubt the dreariest month of the year and I am so longing for it to end...

The slug was really tiny - less than a centimeter - and adorable. On the other hand, probably on its way to demolish my hostas.

Thank you for this lovely collection of garden crawlies and fliers, esbee.

Please click on the images to enlarge.
Posted by regina at 23:00

Poor Todd, he tries and he tries, but can't win anymore... 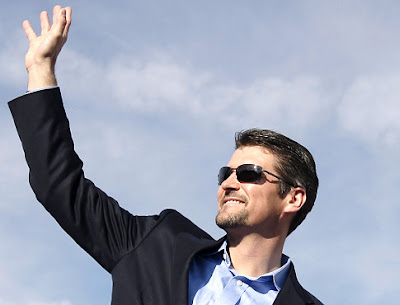 Todd has failed to win the Iron Dog since 2007. When he doesn't break his snowmobile, he breaks a limb or something.

The team of Huntington and Olds crossed the finish line of the 2,000-mile snowmachine race in Fairbanks at 5:51 p.m., Saturday, about 18 minutes ahead of the second-place team of Todd Palin and Eric Quam. Palin’s hometown is Wasilla, while Quam is from Palmer. Palin and Quam were actually in the lead coming down the homestretch into Fairbanks, but Palin suffered a mechanical issue that allowed Huntington and Olds to pass them.

“We had all kinds of neck-and-neck and back-and-forth going on,” said Iron Dog Executive Director Kevin Kastner. “At one point, (Marc) McKenna and (Dustin) Van Meter were blasting along and they went into the drink. In the end, the net result that ended up making the decision was Palin had an accident and nearly tore the ski off his sled.”

So much bad luck... As the non-girly sidekick of a very famous person, there are too many eyes on his team and they can't resort to some of their tried and tested tactics anymore.

There were other rumours about charming Todd kicking competitors' fuel cans and other nasty bits and pieces, but who knows?

There are lots of smaller teams without big sponsors, who don't have multi-millionaire wives. They compete fairly and find it galling to be beaten by cheaters. Marc McKenna's team is one of them. One of his small sponsors was very upset in 2007 and it was not for political reasons. It actually upset him even more when the news of Todd's team cheating hit the news and gave the liberals ammunition against his governor.

I believe that in the old days Todd competed hoping to win the prize money, it made a difference to him back then. I'll leave you with this video of an endearing young lady talking about her husband's win in 1995. Classy gal...

It looks like Todd's luck has run out and his aspirations of being a winner are going the same way as his wife's...

(Pat on the back for me. I managed to write a whole post without typing a certain name once. It might not do me any favours as far as the search engines go, but I don't care, it feels so good not to type her name...)
Posted by regina at 14:30 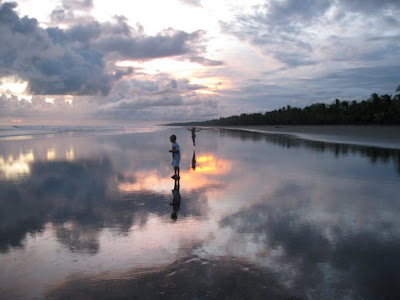 Our reader Monologues sent in this photo, taken in Costa Rica in June.

"A photo of my children on the beach in Costa Rica."

Monologues registered a moment when the light changes rapidly and the subtle colours give this picture an almost surreal quality. Her children played happily in this exquisite scenery, making it a very special photo for mom's album.

Thank you for sharing, Monologues.
Posted by regina at 23:00 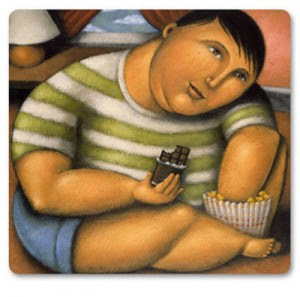 First Lady Michelle Obama and then Governor Sarah Palin once shared a common sense approach to exercise and healthy eating.

Let's Move!, a campaign sponsored by Michelle Obama, state on their website:

Parents and caregivers play a key role in not only making healthy choices for children and teaching children to make healthy choices for themselves. But in today’s busy world, this isn’t always easy. So Let’s Move! offers parents and caregivers the tools, support and information they need to make healthier choices while instilling healthy eating habits in children that will last a lifetime.

Sarah Palin, in her last State of the State Address, 2009:

We have alarming levels of heart disease, diabetes, childhood obesity – and all of these maladies are on the rise. Now, I won’t stand here and lecture – for very long – but health care reform on an individual basis is often just this simple: we could save a lot of money, and a lot of grief, by making smarter choices.

It starts by ending destructive habits, and beginning healthy habits in eating and exercise. In my case, it’s hard to slack when you have the ever-present example of an Iron Dogger nearby. But many of us could use a little more time in our great outdoors – and when you live in the Great Land, there’s no excuse.

Protecting good health is largely a matter of personal responsibility, but government policy can help. Our new Alaska Health Care Commission will recommend changes that affect the well-being of Alaskans far into the future.

Sarah Palin, for no other reason than to slam any initiative embraced by the Obamas, decided to abandon common sense:

Sarah Palin appears to worry a lot more about her children's mistakes making into the pages of the National Enquirer than about their health.

She definitely doesn't worry about the health of other children either:

Jamie Oliver has a lot of common sense regarding healthy eating and he also has a no-nonsense way of speaking his mind:

Improving what children eat at school alone can have a far-reaching, positive effect on their habits and health as adults, Oliver said at the South Beach Wine and Food Festival.

He said he doesn't have much faith that government will lead the way, but said the administration of President Barack Obama is on the right track.

Mrs Palin, in contrast, "clearly on this issue is a Froot Loop", he said in a reference to the highly sweetened breakfast cereal. 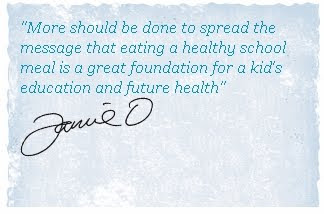 The health of the nation's children may not be a priority for Sarah Palin, but as she's so keen to talk about wasting money and is an expert on what weakens the economy, perhaps putting a price tag on obesity might help her regain her common sense:

Sarah Palin appears to be for something before she's against it, depending on how many political points she can score. Compromising children's health for her own ends is simply despicable.

Previous post about children's health on Palingates.
Posted by regina at 15:35 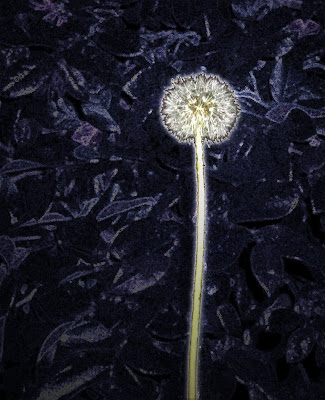 Reader hauksdottir is an artist. She combines photography and gentle manipulation to create stunning pictures. Over to hauksdottir:

This was supposed to be simple: a nice clean shot of a dandelion in front of a red-leafed shrub, but the light was fading, the leaves stopped glowing, and I had to use the flash.

When opened in PhotoShop, the leaves were practically black, so this turned into yet another creative rescue mission... a few layers and blending modes... and the result has a hint of star-shine.

Note: I really like dandelions, but if they are going to insist upon living in my perennial beds, they will have to cooperate better!

Thank you for sharing, hauksdottir.

Readers will be pleased to know that there are more of these pictures to be shared in the future...
Posted by regina at 21:30

I'm in a frivolous mood and have been a bit distracted. As I have several photos of Sarah Palin wearing some fantastic clothes, I decided to embark on one of my silly photo comparisons.

Let's start with the good old days when Sarah Palin chose her own clothes, which brought us this great selection of very diverse attire, not always elegant and sometimes not terribly appropriate:

Her choices then were not Vogue material, but I feel we could see the real Sarah Palin, a more genuine version of the one presented to the nation during the campaign. I read somewhere that Alaskans don't make too much of a fuss about what they wear, they just want to feel comfortable. There is something refreshing about the governor feeling and acting the same way.

When the RNC dressed Sarah Palin and took care of her hair and make-up, the results were quite different, her image was carefully managed and I think she looked good. They made the most of her natural beauty.

Some expert advice and a lot of other people's money can work miracles!

Now Sarah Palin is a multi-millionaire and has a team of aides. Apparently, this team doesn't include a stylist or a personal shopper: 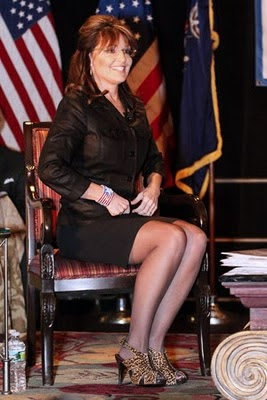 She seems very pleased with herself. But she lost much of her looks trying to improve them. Whereas before she became nationally famous she looked fresh and not affected, now her preocupation with her own image shows and the results don't match her ambitions. Her taste in clothes and accessories has not improved and she chose the wrong image for the job she desires.

Sarah Palin looked happier and more relaxed in Alaska. We were happier and more relaxed when she was in Alaska. Since 2008 we have been affected by her transformation and after she left Alaska behind to pursue fame and fortune on the national and international stages, her inner ugliness has extended to her critics as well, we've been infected. Sometimes we show very nasty signs of this terrible affliction and hurt each other nearly as much as she hurts the civil political discourse...

Please treat this as a kind of (political?) open thread, how long can anybody discuss Sarah Palin's clothes?

(Click on each picture to enlarge)
Posted by regina at 11:00