Sarah Palin and the wolves, again

This is how dead wolves look after Sarah's men have shot them from the air. It's not a pretty sight. They ran out of money and snow to finish the job. For now... 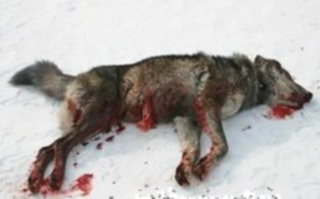 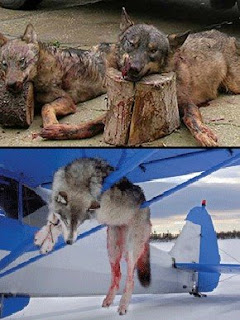 The Department of Fish and Game stopped shooting wolves from a helicopter in the eastern Interior on Thursday after killing 66 wolves in five days as part of an intensified and controversial predator control program to increase caribou and moose numbers in an area east of Tok.

State officials were hoping to kill as many as 150 wolves by tracking them via airplane and shooting them from a helicopter, but a lack of both fresh snow and money prompted the department to temporarily halt the program.

The department had $100,000 set aside for the helicopter shootings, and James said the agency had used “probably 80 percent” of that as of Wednesday.

Asked what it would take to get department sharpshooters back in the air, Fairbanks regional supervisor David James replied, “More money and more snow.”

Private pilot-gunner teams with permits from the state can continue to take wolves until April 30 or conditions are such that planes can no longer land to retrieve wolves that are shot. The wolf trapping season also closes April 30.

Even though the department didn’t kill as many wolves as it set out to, James said the program was a success.

“Considering the portion of the total control area we covered we’re pretty pleased at this point,” James said. “There are substantial portions of that control area that we haven’t covered yet.”

I'm sure Sarah Palin will find plenty of money to continue the slaughter. Sarah and her Board of Game have their own stimulus plan to preserve prey for sports hunters. In 2007 they spent $400,000 in a state propaganda campaign to "educate" the public about predator control.

They don't have money problems, but hopefully there won't be any fresh snow.

Reg, these pic are heartbreaking!
I am happy they stopped the hunt. Could it be b/c their about to get their a$$ sued?
And you would think the people of Alaska could find a better way to spend 100K?
I had just donated to DoW this morning, before I saw the news. Pray for no more snow!