This is from "Going Rogue", expressing Sarah Palin's own thoughts:

Just before Track was born, Todd and I moved to a small apartment in Wasilla, next door to our good friend Curtis Menard, Jr., who by now was a dentist like his dad. Curtis was like a brother to me. We asked him to be Track's godfather. Todd and I shared one car, and we loved our little life together, though with the Slope and fishing schedule we still didn't see each other very much. I wanted another baby right away, so I was excited when I learned I was pregnant again. We were sure it was another boy, and we decided to call him Tad, a combination of Todd and Track.

I loved the fact we had planned so well and that events were falling neatly into place in our well-ordered lives. Our babies would be a year apart, right on schedule. At the beginning of my second trimester, I went in for my monthly exam. Todd was on the Slope. He had always been good about leaving me short love notes before he left, but as I drove to the doctor's office, his latest played in my head because it had a special addendum: "I love you, Tad!"

At my exam, the doctor listened for the baby's heartbeat. When she didn't smile, I didn't worry; she was known for her mellow demeanor. But I noticed that she kept moving the stethoscope around. And she didn't hand it to me as doctors usually do, so the expectant mother can listen to the sound of life.

"Let's do a quick sonogram," she said.

I agreed, eager to confirm that Tad was a boy - or to be surprised.

We moved to another room, and I lay down on a sheet-covered table. The doctor spread gel on my belly and began sliding the transducer back and forth. I waited for the familiar Shoosh-shoosh-shoosh sound of the baby's beating heart. 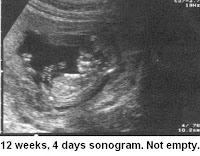 But it didn't come. And the sonogram picture looked empty.

The doctor said coldly, "There's nothing alive in there."

Her bluntness shocked me. I felt sick and hollow, and burst into tears.

"You have a couple of choices about getting rid of it," she said.

"It." That's what she called our baby, whom we'd been calling Tad for three months.

She went on to explain that I could go home and let "it" pass naturally. Or I could have a D&C.

Todd flew home to be with me when I had the D&C. When the doctor's bill arrived in our mailbox, it came with a typo. In the box describing the procedure, someone had typed, "Abortion." Instead of starting off with a fresh form, they painted it over with a thin layer of Wite-Out and retyped, "Miscarriage." For some reason it just felt like salt in the wound.

Hmmm... where do we start? This is so badly written it's difficult to make any sense out of it. The bulk of the sub-chapter's section was transcribed above. It deals with their schedule for producing babies and how this carefully planned schedule was cruelly disrupted by events in the second trimester of her pregnancy.

Knowing something about writing and how to structure a text, I don't understand why she opened this section by mentioning Curtis Menard Jr. How is the fact that he lived next door relevant to the rest of the passage? Oh, yes, he was invited to be Track's godfather. But it seems to me that the key is in this sentence: "Curtis was like a brother to me."

How did she manage to get pregnant 3 months after Track's birth if "with the Slope and fishing schedule we still didn't see each other very much."? They must have planned every second of every minute of every available day: "I loved the fact we had planned so well and that events were falling neatly into place in our well-ordered lives. Our babies would be a year apart, right on schedule."

Then we have a doctor "known for her mellow demeanor" described as cold and blunt a few paragraphs later.

I found two definitions of mellow:


1. Having the gentleness, wisdom, or tolerance often characteristic of maturity.
2. Relaxed and unhurried; easygoing.

The mellow doctor was cold and blunt? Maybe Sarah Palin and her ghostwriter don't quite grasp the meaning of the word mellow?

But the killer is in the last paragraph: When the doctor's bill arrived in our mailbox, it came with a typo. In the box describing the procedure, someone had typed, "Abortion." Instead of starting off with a fresh form, they painted it over with a thin layer of Wite-Out. and retyped, "Miscarriage."

I'm a physician, and this is the silliest thing I've ever heard. First of all the sonogram wouldn't look empty, and how would Sarah know if it was? Does she know how to read sonograms? No doctor, not even one, would tell her that the sonogram looked empty, simply because that's not how it works. Sarah thinks that her uterus was like an empty house with all the furniture gone. Instead, think of Grand Central Station.

A D&C when you are pregnant is an abortion. There's no other term for it. Her story about the word "miscarriage" on the hospital bill would be silly as "miscarriage" is not a medical term - that's layperson speak.

In other words, "abortion" is a medical procedure, "miscarriage" is not.

Over many other threads, people remarked that no clinic would use Wite-Out on a bill.

Sarah Palin's reason for including this little tale was raised as well.

Personally I think that the whole point of the miscarriage/abortion mention in the book should be to ask "why" it was brought up.

There was absolutely no reason to bring it up. Unless she spoke in great detail about each of her pregnancies, then what would be the point of her bringing this information up in her book, sharing it with everyone.

She does it for a reason, and the question is what is the reason she felt the need to make this information known.

Is she worried about someone revealing this information and it being damaging? Is she worried that the truth will come out about an abortion and she is revising the story before it comes out so she can claim she has already told people about what "really" happened, in an attempt to lessen the damage it might do to her "pro-life" cred?

Make no mistake, this was offered up for a specific reason, especially considering how little was offered about her medical history in that letter released for the presidential election.

Our suspicions regarding this strange tale arose entirely from Sarah Palin's own account of events. Just like the wild ride...

Sarah Palin appears to be incapable of telling her stories without introducing embellishments that come across as odd and contradictory.

As with all Sarah Palin's versions of events, her very own words seem to be her worst enemies.
Posted by regina at 22:18