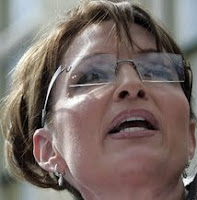 We're glad that this particular topic will not go away. Sarah Palin harped on this note since her gubernatorial campaign, continued on the same note in the vice presidential roadshow and made several references to being open and transparent in "Going Rogue".

Sarah Palin used her influence and her Personnel Board to hide her transgressions from the public when she was governor.

But her accountability is still in question.

Alaska Dispatch (Part 1 and Part 2) obtained copies of some e-mails sent from Sarah Palin's yahoo account and they are very interesting: 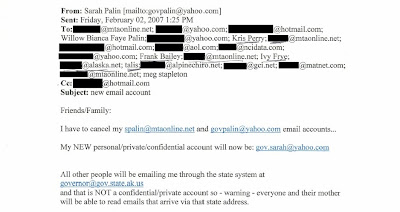 Certain recipients had their names redacted, but some of them are easily recognizable as government officials, such as Kris Perry, Frank Bailey, Ivy Frye, Talis (Colberg) and Meg Stapleton. Hardly family or friends. We suspect her chief of staff, Mike Tibbles, was also included among the recipients:

Another e-mail was sent to quite a number of government officials: 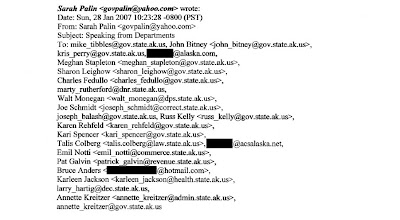 I love the tone of Sarah Palin's e-mails. Yes, she's definitely transparent, but NOT open. Her intentions are quite transparent, but she certainly didn't want to be open to public scrutiny.

This video shows it very clearly: 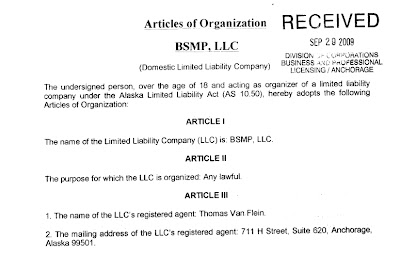 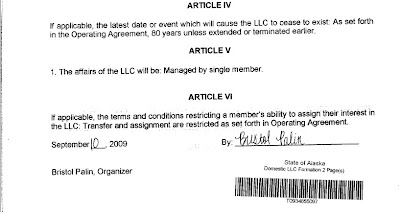 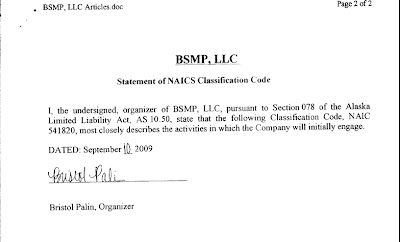 The NAIC code 541820 is listed in the state of Alaska simply as Public Relations Agencies:

But in the document NAICs Definitions 2007, on page 444, we find an expanded definition of Public Relations:

So what is BSMP, LLC all about?

Our friend Archivist, of So it goes... , believes it's a convenient way for the Palins to get their hands on SarahPac's money:

It's a FRONT to absorb the PAC funds... avoiding tax on Bristol's earnings is small potatoes compared to being able to essentially PAY HERSELF out the the PAC to 'consult' and 'endorse' candidates! 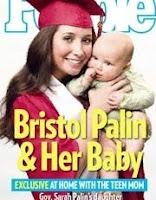 On page 428 of the NAICs document, there's an overview of the 54 sector as a whole:

Bristol does not have a high degree of expertise or training, does she?

Rachel Maddow has weighed in as well:

We don't buy it either... the Palins may not be open, but they're all too transparent.

I suppose we'll have to wait for the next SarahPac accounts to be disclosed. Does anybody know when it's due?

Celtic Diva has a very important post regarding the harassement of the judges in the Bristol Palin v Levi Johnston custody case. Sarah Palin's supporters have a protest organized on Facebook. I made some screenshots of the protest page and of Sarah Palin's own Facebook page, where the link to the protest appears unchallenged and unmoderated.
EDIT: A PDF-copy of the facebook page can be downloaded here.
This is the event page: 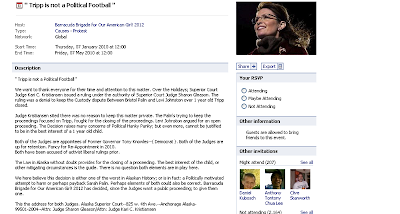 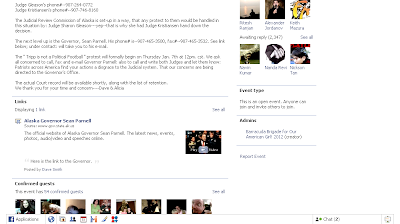 The link was posted on Sarah Palin's official Facebook page: 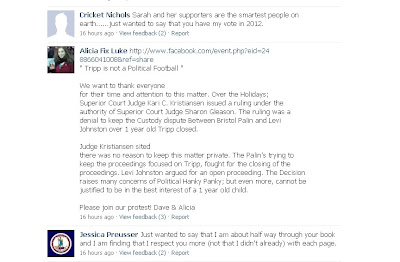 The Facebook Barracuda Brigade are simply supporters of Sarah Palin, but they were allowed to post their link on Sarah's own page. She's responsible for the content of her only "official" platform.

Sarah Palin has not condemned this campaign to harass the judges, which makes her just as guilty as the rest of her misguided supporters.

We know she reads the blogs, so we may see a twit or a Facebook note about it in the near future... or not.