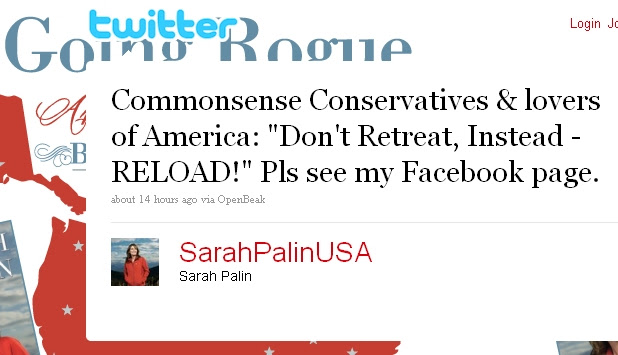 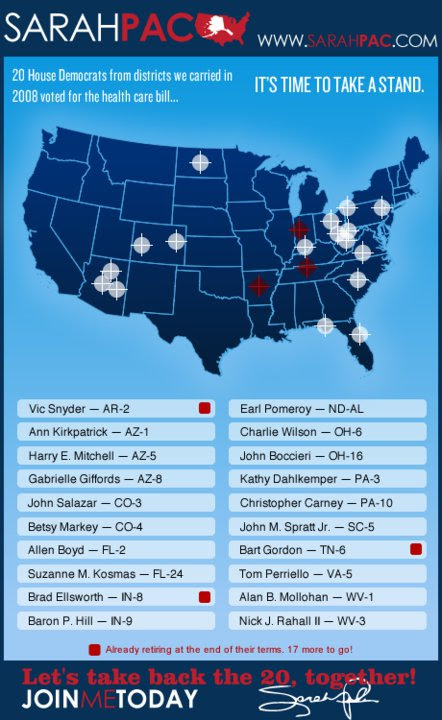 Here is the enlarged picture of the crosshair which Palin used in this graphic:

The words and the rifle scopes used on the map say a lot about "violence is not the answer."
Sarah Palin may not be a serious, viable candidate for anything, but her coded words and inflammatory rhetoric are very dangerous. She derailed the debate on the HCR with her "death panels", divided the country with her "Real Americans" speech and now appears to be calling for an armed retaliation against elected representatives of the people.
Rachel Maddow reports on violence that has already erupted:

This is frightening. It started with bricks, now they're cleaning their rifles, ready to reload.
The sight of blood seems to excite Sarah Palin, be it the blood of wolves, bears, moose or caribou.
She has moved to human targets... Sarah Palin needs to stop, sit down and shut up.
Another violent character HERE.
+++
UPDATE (by Patrick):
It is safe to say that Sarah Palin is now in serious trouble because of her irresponsible actions which we described in this post.
Sarah Palin has taken one step too far.
Just watch these two new clips below.
Sarah - you are toast, and you thoroughly deserved it.

LINK TO THE FIRST VIDEO

LINK TO THE SECOND VIDEO

Our reader "voiceinwind" reminded us that Sarah should have a look into the Unites States Code before she publishes this type of incendiary garbage:

Whoever incites, sets on foot, assists, or engages in any rebellion or insurrection against the authority of the United States or the laws thereof, or gives aid or comfort thereto, shall be fined under this title or imprisoned not more than ten years, or both; and shall be incapable of holding any office under the United States.

In addition, the Anchorage Daily News gives an overview of the devastating comments circulating in the media regarding Sarah Palin's dangerous and inflammatory stunt.

Please report Sarah Palin on facebook for inciting violence - here are the links:

Does Facebook remove everything that gets reported?
Facebook thoroughly reviews every report we receive to determine whether or not the content violates our Terms of Use. Any content that is considered sexually explicit, violent, malicious or otherwise offensive will be removed. If you received a warning about an item that was taken down, then we have established that it violated these terms.
http://www.facebook.com/help/?faq=12160

Many thanks again to our reader "voiceinwind" for roaming throught the statutes!

The Republicans were very enthusiastic about the "Patriot Act". Does Sarah Palin violate it? Well, you be the judge!

(4) by adding at the end the following:

(A) involve acts dangerous to human life that are a violation of the criminal laws of the United States or of any State;
(B) appear to be intended--

(C) occur primarily within the territorial jurisdiction of the United States.
.