The complete reports by Palingates about the CSU Stanislaus-Palin scandal CAN BE FOUND HERE.
+++
Read the full transcript of the speech HERE - plus video. Palin's factual mistakes exposed!
+++
UPDATE:

The clip with the complete embarassing open microphone remarks by the journalists and technicians after Sarah Palin's speech in Turlock, who slammed her!
NEW, IMPROVED AUDIO CLIP UPLOADED:

"Now I know the dumbness doesn't come from just soundbites." ﻿

This is one of our favorite quotes of all times. ;-)
+++
TRANSCRIPT OF THE OPEN MIC REMARKS:

What’s your problem?
Oh my god I feel like I just stepped off of a roller coaster! Go round and round and up and down and shit flying out of everywhere and standing. Remember when you had to write a report as a college student and you just tried to jam in as many quotes as possible? You know, from as many random things you could get, you know, that’s what I got.
I got she didn’t ever finish a statement.
Right.
(?)
Did she make a statement? Cause I didn’t catch that either.
I think she said, “Hi” and “Thanks”.
To think she could even quote Kennedy.
Twice.
Hey, I’m really sorry the cam, the feed died.
No, no, yeah. Pfft.
Yeah, after 8 hours.
It just shut off.
You guys have a tough job; I don’t know how you’re going to make a story out of that.
Well… that’s the story.
I mean, the story of the story.
(??)
Thanks.
All right guys.
Now I know the dumbness doesn't come from just soundbites.
I saw the whole thing.
(???)learn a whole new (??)
Well____, you weren’t the only one who had problems.
I'm going to go send this text to my conservative friend.
(???) speech therapy.
Tech talk.
The end.

+++
Please read also the story by Sarah Jones on politicususa regarding these remarks.
+++
Today is a big day for Turlock and CSU Stanislaus! "Political celebrity" Sarah Palin is in town!
Here is an overview of the main CSUS/Palin-related scandals which happened since Sarah Palin was announced as a speaker for the 50th Anniversy Gala of CSU Stanislaus.
We have boots on the ground today in Turlock and expect to receive more reports, photos and video footage during the next hours.
Here are some impressions of the situation at CSU Stanislaus today- a large part of the CSU Stanislaus campus is fenced in (pictures published with permission):

Here is a new clip from today with footage from the inside.
Thanks to California Watch, we already know what the speech will look like!
This is the menu for evening.
A live feed from the speech will be broadcast on Fox40 at 7pm CA time.
UPDATE: Sarah Palin is late, the speech will now apparently start at 9.00.

Here is the embedded player for the live stream, hope it works:


Many thanks to our friends at www.politicususa.com for providing us with the correct link to the live stream! Alternative link at politicususa HERE.
Another option:
TurlockCityNews will have a live broadcast!
+++
SFWeekly reports:

With Sarah Palin due to speak at CSU-Stanislaus today, students at the Turlock campus tell SF Weekly that they're essentially being barred from their school.

"They've fenced in our campus. Students and faculty are not welcome on our own campus," said Ashli Briggs, a senior and vocal critic of Stanislaus bringing the former Republican vice presidential candidate to campus -- for $93,000 -- to celebrate the school's 50th anniversary. Yellow-shirted private security officers "have told students to keep moving. You're not allowed to loiter."

However, we will have some surprises soon regarding the identity of some of the donors! :-)
+++
Modesto Bee reporter Patty Guerra writes:

Just returned from a press conference at which CSUS Foundation President Matt Swanson announced tonight's fund-raiser has brought in $200,000 net for the university. It's the most ever raised at a single event on campus - donations for buildings and the like notwithstanding. The following figures are estimates: $450,000 gross income, $50,000 in in-kind contributions (things such as drinks and supplies), less than $200,000 in costs. The next-highest fund-raiser, a concert by Gary Sinise's band, grossed $200,000, Mr. Swanson said. Fencing has been erected around the interior of the university; I and other media representatives had to go through a couple of checkpoints. One protester, so far: A man with signs that read "Teabag Leland" and "Run Sarah Run" on the corner of Monte Vista and Geer.

+++
Interesting twitter message - news from the hairdressers! ;-)
+++
I have promised you new juicy revelations "Palingates-style" - here we go!
Take a look at the names of the Board Members of the CSU Stanislaus Foundation:

Guess who donated large sums for this event with Sarah Palin?
CSU Stanislaus alumni Michael R. Leaveck, a Vietnam Veteran who returned in protest his alumni of the year award from 1990 because of Sarah Palin's appearance today, received some inside information about some of the donors.
May I present donor No 1:
Bill Ahlem, co-founder and co-owner of Hilmar Cheese Co.: $ 10,000 donated
See the list of board members above...also for the following names.
Donor No 2:

NO GEMPERLE EGGS FOR TRADER JOE'S: Trader Joe's announced Thursday that it will stop carrying eggs from Gemperle Farms, a Turlock-based producer, because of allegations that some of its laying hens were abused. The announcement came two days after Mercy for Animals, a Chicago-based group, released an undercover video showing what it claimed were abuses at egg farms near Hilmar and Delhi. Gemperle Farms representatives could not be reached for comment about the Trader Joe's announcement. Earlier this week, company President Steve Gemperle said it "doesn't tolerate the abuse of animals." He also questioned whether the video was shot at his operation. Trader Joe's spokeswoman Alison Mochizuki says the chain decided it doesn't want to carry eggs from Gemperle Farms because "it is of utmost importance that all of our vendors abide by industry-established animal care practices."

Lastly (although there may be updates) we come to the last known donor - and this one is a real heavyweight!
The name of the company: Associated Feed (feed manufacturing and service).
This company was incredibly generous and gave $ 50,000!
What is their interest? Well, it's quite simple:
The President of Associated Feed is none other than the President of the CSU Stanislaus Foundation himself: Matt Swanson!
Therefore with this $ 50,000 donation by Matt Swanson himself, Republican Matt Swanson made sure that his high-profile event with Sarah Palin wouldn't be a failure!

Therefore these known contributions by board members for this event already amount to $ 80,000 - and these are certainly not all board members who donated for this event!
But there is even more:
According to Michael R. Leaveck, the real scandal, well hidden from public view is the fact that for example a donor like Gemperle Enterprises (Farms) was once a sponsor of CSU Stanislaus "Presidential Scholarships," a program that has been discontinued as of this year due to economic hard times. Instead, this year, Gemperle Farms is a $10,000 sponsor of the 50th Anniversary Black Tie Gala, featuring Sarah Palin!
Therefore it's a fact that this Palin fundraiser is just a show and a scam - the Foundation would have most likely raised this money even without Sarah Palin.
But Matt Swanson & Co. ensured that they would have a big political show as well - and Sarah Palin can now wrongly credit herself with having raised a large amount of money for the Foundation.
Brave new Palin world!
+++
Update on the protests:

About 100 demonstrators are at California State University, Stanislaus, protesting tonight's fund-raising speech by Sarah Palin. "What's for dinner? Polar bear!" the protesters are shouting near the Vasche Library.

About a dozen campus police officers are watching the scene.

+++
Here are some pictures of the interior for the event with Sarah Palin - fascinating!
Picture credits: Modesto Bee

Fake tree with fake golden leaves! Beautiful!
And Republican red for the tables, naturally!
According to Michael R. Leaveck, the Foundation paid $ 35,000 for the interior, to the company "Infinite Creations".
I would like to stress that Kathleen is in touch with Michael and got these details confirmed.
+++
CSU Professor Patrick Kelly, one of the "heart and souls" behind the protests against the appearance of Sarah Palin, left a message on facebook:

Please follow the link below, and this Facebook page and other sources (Palingates) to keep in touch with what is going on in Turlock this evening.

That is what I am doing from Montana and I wish I could be in Turlock in solidarity with the students, faculty, staff, and alumni who have been so deeply offended by the "TERRIBLE CHOICE" of a small group of people in the CSU Stanislaus Foundation and university administration to select Sarah Palin as being in some way representative of academic excellence by selecting her as KEYNOTE SPEAKER and GUEST OF HONOR for this evening's 50th Anniversary Gala.

This is more than a joke. It is a deep insult to most who care about the university and it flies in the face of what a university should be about. Our university administration and its partners in this terrible enterprise have done a grave disservice to the institution they supposedly serve.

I now look forward to a complete audit of ALL expenses associated with hosting this political sideshow. If a true accounting is produced, I will be surprised to see it making any profit.

UPDATE ON THE TWEET AND ON OUR PREVIOUS CORRECTION: The author of the tweet wanted to express that no student journalists were given access to the event, which is true. However, the editor of the "Signal" was given access, who is not a student.
+++
Excellent new clip by CBS 13 about the security measures - "over one mile of fence" - CLICK HERE!
Screenshots:

I love this screenshot! ;-)

First pictures of the protests: 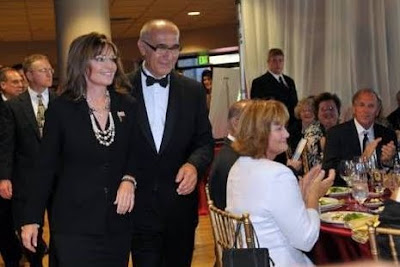 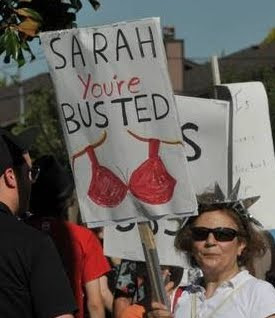 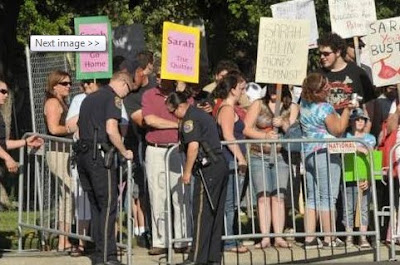 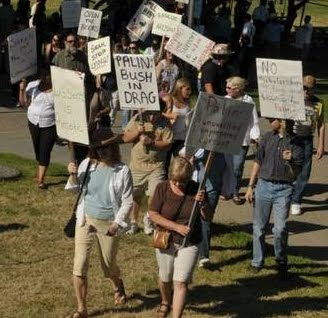 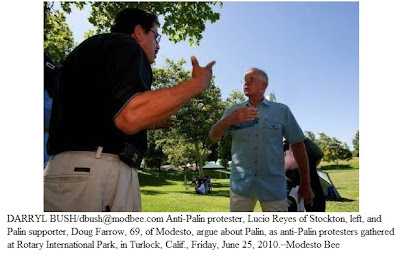 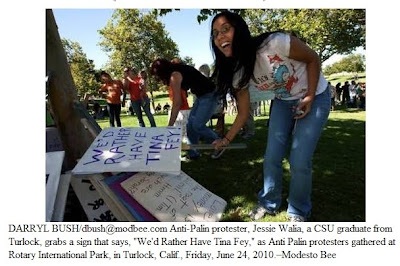 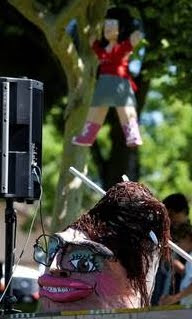 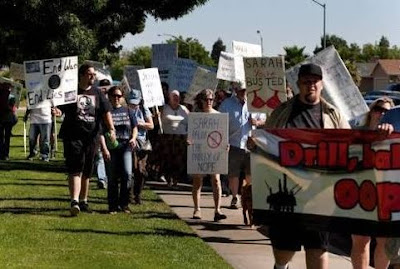