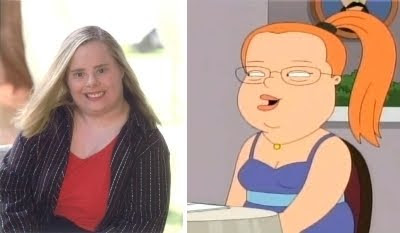 Andrea Friedman and character Ellen
The father of the actress who provided the voice for the character of the young woman on the episode of Family Guy, which Sarah Palin described as "a kick in the gut", has sent this e-mail to a friend of Palingates:
Below is a copy of a letter to the editor that Andrea has written and sent. Please feel free to circulate it on the web or in any other manner that you choose.

My name is Andrea Fay Friedman. I was born with Down syndrome. I played the role of Ellen on the "Extra Large Medium" episode of Family Guy that was broadcast on Valentine's day. Although they gave me red hair on the show, I am really a blonde. I also wore a red wig for my role in " Smudge" but I was a blonde in "Life Goes On". I guess former Governor Palin does not have a sense of humor. I thought the line "I am the daughter of the former governor of Alaska" was very funny. I think the word is "sarcasm".

In my family we think laughing is good. My parents raised me to have a sense of humor and to live a normal life. My mother did not carry me around under her arm like a loaf of French bread the way former Governor Palin carries her son Trig around looking for sympathy and votes.

Andrea sent her comment by e-mail to the New York Times.

UPDATE by Regina
Here is a screenshot of the e-mail: 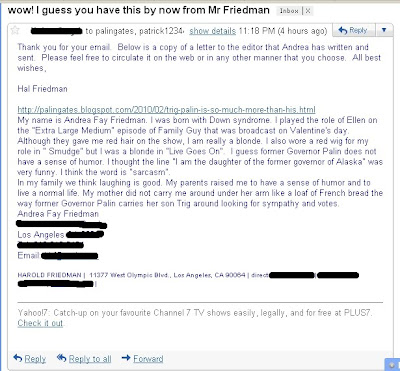 The New York Times has admitted that they left the "loaf of French bread" sentence out of their original article.

In an e-mail message sent to The New York Times, Ms. Friedman wrote, “I guess former Governor Palin does not have a sense of humor.” She added that in her family, “we think laughing is good,” and that she was raised by her parents “to have a sense of humor and to live a normal life.”

Ms. Friedman continued, “My mother did not carry me around under her arm like a loaf of French bread the way former Governor Palin carries her son Trig around looking for sympathy and votes.”

QUOTE:
The New York Times, continuing their inability or failure to truly investigate the truth about Palin, excised the last sentence from Friedman's email in its story. Why am I not surprised? This is a paper that cannot call torture torture because Republican war criminals intimidate them. And they cannot give a person with Down Syndrome an opportunity to expose the cynicism at the heart of Palin's exploitation of Trig.

From our point of view, however, we cannot complain, because the fact that the full uncensored statement was only available on Palingates brought ten-thousands of new readers to our blog. Thank you, New York Times!

Andrea Fay Friedman discussed today on "The Insider" the "Family Guy controversy", her own upbringing, Trig and Sarah Palin:


I think that Andrea is very reflective and she carefully makes her own mind up before answering the questions. I am beginning to understand how much potential people who were born with Down Syndrome can have if the receive the right kind of support.
It is very moving when Andrea talks about how she was teased from childhood onwards, and it seems that these experiences made her stronger. Andrea is a brave woman and a great role model. Sarah Palin shouldn't allow Trig to become a victim, but she should steer him in a direction which will give him strength and independence, like Andrea has achieved it together with the help of her parents.

This is a preview of the documentary: "A possible dream - The Andrea Friedman story":

In addition, please read HERE about Andrea Friedman as a keynote speaker.
Quote:

Because of her television activities, Andrea is often invited to be a motivational speaker and supporter of causes that help other challenged people. She has spoken to many local, statewide, national and international organizations, including the students and faculty at the Harvard University Graduate School of Education, on the subject of the advantage of a “mainstream” education for people with learning disabilities.

Andrea’s life is certainly very different from that which was predicted when she was born. She lives independently. When she is not acting, she works in the accounting department of a major law firm. She drives her own car and manages her own schedule, budget, housekeeping and social life. Andrea says she has “Up” syndrome, not Down syndrome and wages a personal battle against the words “retarded” and “disabled.” “I am challenged, not disabled,” she insists. “‘Disabled’ means ‘cannot do’, but my challenged friends and I can do. Some things are hard for us, some things take longer to learn; but if we work hard, we can do.” Andrea does work hard and every morning announces, “I love my life. I wonder how many new friends I’ll make today.”
Posted by regina at 01:00