On the eve of the election in 2008, Sarah Palin released this letter: 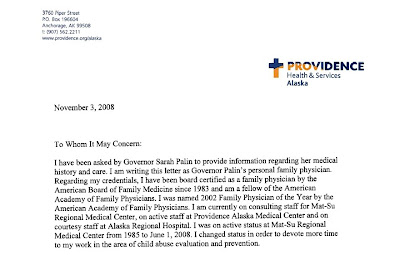 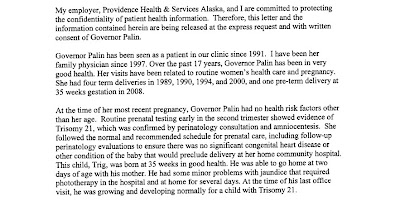 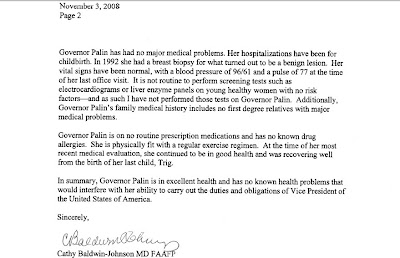 The doctor who delivered Piper had her birth date wrong (Piper was born in 2001).

Sarah Palin's two miscarriages were not mentioned at all. We've learned about them by reading her book, Going Rogue.

The report describes Trig Palin's health in some detail. He was not the candidate for the vice presidency, so why disclose details of his birth and his health in particular? How come the other four children get a passing mention, but Trig has a whole paragraph dedicated to him?

Did candidate Obama's medical report contain details of his daughters' health and the circumstances of their births? OK, he's a man, so it wouldn't have affected his health directly. But if Hillary Clinton had been the candidate, would we have learned all about Hillary's pregnancy, Chelsea's birth and her general health? Would such information belong in a candidate's medical report?

There had been no rumours about Hillary faking her pregnancy with Chelsea, but the McCain campaign announced Bristol Palin's 5 month pregnancy to rebut the rumours about Sarah Palin:

ST. PAUL (Reuters) - The 17-year-old unmarried daughter of Republican vice presidential candidate Sarah Palin is pregnant, Palin said on Monday in an announcement intended to knock down rumors by liberal bloggers that Palin faked her own pregnancy to cover up for her child.

Sarah Palin was reluctant to release her medical records:

Yes, her medical report was released very late the day before the polls opened, too late to be examined the media.

Since then, the media not only failed to take a closer look at it, but appear to have grown allergic to the mere mention of Sarah Palin's strange pregnancy.

The story as had a reprieve and it's starting to be discussed again. Some in the media are still dismissive of the whole saga, but others are taking it more seriously, especially after Sarah Palin herself wished that Donald Trump would be successful in finding out what it is that president Obama is hiding about his birth certificate.

Trig Palin is three days away from his third birthday, according to the birth date that was made public. In these three years, Sarah Palin had plenty of time and earned enough money to be able to procure a suitable birth document to "prove" she gave birth to Trig on that date.

At this stage, only DNA tests conducted under the scrutiny of independent experts would satisfy the people who are all too familiar with Sarah Palin's history of obfuscation and deception...