Learning with Sarah Palin is fun! "Paul Revere did warn the British. And in a shout-out, gotcha-type of question that was asked of me, I answered candidly. And I know my American history."

"I haven't heard the president state that we're at war. That's why I too am not knowing -- do we use the term intervention? Do we use war? Do we use squirmish? What is it?" (on the U.S. and NATO bombing of Libya.)

"But obviously, we've got to stand with our North Korean allies."

"Ground Zero Mosque supporters: doesn't it stab you in the heart, as it does ours throughout the heartland? Peaceful Muslims, pls refudiate."

"Barack and Michelle Obama have power in their words. They could refudiate what it is that this group is saying."

"This is Reagan country. Yeah! And perhaps it was destiny that the man who went to California's Eureka College would become so woven within and inter-linked to the Golden State." (Eureka College is in Illinois.)

"I think on a national level your Department of Law there in the White House would look at some of the things that we've been charged with and automatically throw them out." (There's no Department of Law.)

"Ohh, good, thank you, yes." (after the Canadian prank caller complimented her on the documentary about her life, Hustler's "Nailin Paylin.")

"They're in charge of the U.S. Senate so if they want to they can really get in there with the senators and make a lot of good policy changes that will make life better for Brandon and his family and his classroom." (Explaining what the VP does.)

"I like being here because it seems like here and in our last rally too -- other parts around this great Northwest -- here in New Hampshire you just get it."

"They are also building schools for the Afghan children so that there is hope and opportunity in our neighboring country of Afghanistan."

"Oil and coal? Of course, it's a fungible commodity and they don't flag, you know, the molecules, where it's going and where it's not."

"Our next door neighbors are foreign countries. They're in the state that I am the executive of. And there in Russia ... We have trade missions back and forth. We... we do... it's very important when you consider even national security issues with Russia as Putin rears his head and comes into the air space of the United States of America, where... where do they go? It's Alaska. It's just right over the border. It is from Alaska that we send those out to make sure that an eye is being kept on this very powerful nation, Russia, because they are right there. They are right next to... to our state."

"But ultimately what the bailout does is help those who are concerned about the healthcare reform that is needed to help shore up our economy." 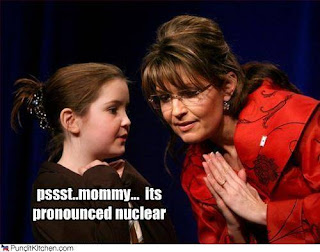 Sarah taught us some lovely words and adorable pronunciations: Ions for eons, mandation for mandate, gutteral for guttural, chronosone, nucular, contradictoring and pundents.

Finally, there's the flavour of the week GOP candidate "Herb" Cain also, too.
Posted by regina at 12:10