How the British view Sarah Palin - PLUS: Sarah Palin confirms again she won't talk to journalists who have a "bias"

By Regina
I managed to record the podcast of a discussion about Sarah Palin's presidential aspirations on Jeremy Vine's program on BBC Radio 2 the other day. Here is a shorter version, as the original ran into nearly 30 minutes:

The British don't appear to have a very good opinion of Sarah Palin, apart from Nadine Dorries, who's not a stranger to funny business herself:

In January 2010, it was revealed that Dorries was being investigated by John Lyon, the parliamentary commissioner for standards, regarding her claim for second home expenses and that it was expected that a number of neighbours from her constituency were preparing to give evidence against her. It was also revealed that Dorries had claimed £20,000 in office expenses for work undertaken by a media relations and public affairs company.

On May 9th 2010, two days after regaining her Mid Bedfordshire constituency, the The Sunday Times revealed that Dorries was facing the first expenses claims complaint of the new parliament. It was reported that she had claimed around £10,000 for an annual report in 2007 on her performance as an MP, but that her former Commons researcher had never seen the report or worked on it. Dorries insisted that she had indeed published the report, placing a photograph of it on her blog. She subsequently told the Biggleswade Advertiser that the report was never printed and a credit note issued with refund on September 13th 2008.

A couple of people were mentioned in the e-mails sent into the program: Kerry Katona and Davina McCall. So as not to let the references go unnoticed by American readers, here's a brief description of the two lovely ladies:

Kerry Katona used to be in a girl band (Atomic Kitten) and married a boy from a boy band (Brian McFadden, of Westlife). She won "I'm a Celebrity Get Me Out of Here," divorced Brian and quickly unravelled , drinking too much and taking too many drugs. She's still regular tabloid fodder in the UK. 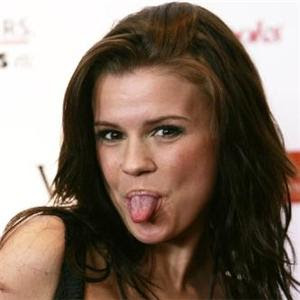 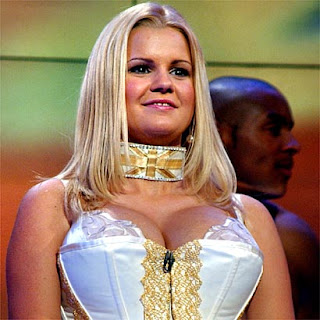 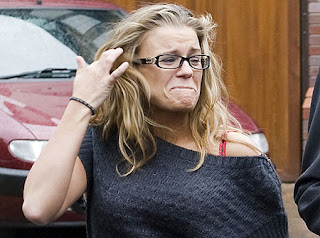 Davina McCall is the hyperactive presenter of Big Brother. She's not as colourful as Kerry Katona, but is generally regarded as a pain in the neck and her chat show on BBC was axed due to very poor ratings. 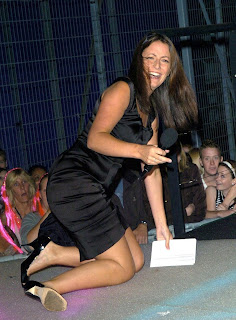 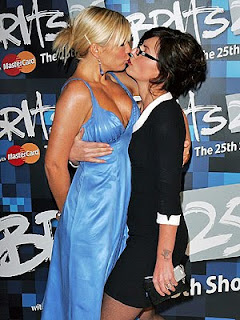 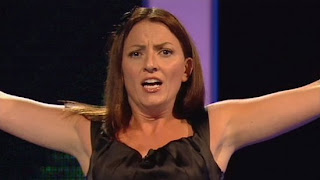 It's refreshing to hear that at least the British didn't fall for Sarah Palin's "charms." Only two pro-Palin opinions from the public were presented on air, but they were more anti-Obama than actually pro-Palin and Jeremy Vine pointed that out when he read them.

Sarah Palin's Alaska has not been inflicted on the British yet, but if it does, I guess that Kerry and Davina's standing would shoot up considerably in the viewing public's estimation...
+++
By Patrick:
Many thanks to Regina for this post! I also would like to point that that especially the UK Guardian has been following the events of the previous days very closely. The British journalist Ewen MacAskill wrote about Sarah Palin's attacks on Barack Obama in "America by Heart" ("Sarah Palin's attacks on Barack Obama get personal in new book"), and the American journalist Amanda Marcotte wrote in the Guardian a commentary about the content of Palin's new book ("Sarah Palin's heartland Americans"). Both articles linked to Palingates.

There is so much happening surrounding Sarah Palin at the moment, it's simply impossible to make a separate post for each subject. Sarah Palin was yesterday on Hannity, and she confirmed again that she won't talk to journalists in the future who have a "bias." Palin still hasn't overcome her massive grudge against Katie Couric, and she probably never will. The wannabe President of the USA is still angry as hell that she couldn't answer Katie Couric's friendly softball-questions.
It's a huge tragedy that the USA is now being tormented by a woman who combines delusions of grandeur with a severe mental disorder and an unrestrained desire to punish her enemies. It's going to get much worse, as Palin has a good chance of winning the Republican nomination. No serious criticism towards Sarah Palin from other Republican contenders is to be expected, because that would be "sexist", wouldn't it? The insanity will continue.
Here is the clip from Hannity:
.
Posted by regina at 14:27