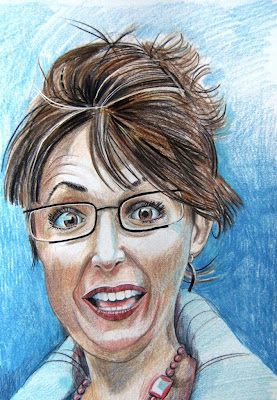 Picture: David C Mills, Flickr
+++Please also read our previous post with more pictures, reports
and the open mic remarks!+++
The complete reports by Palingates about the CSU Stanislaus-Palin scandal CAN BE FOUND HERE.
+++
WOW, what a day that was yesterday! The "online party" with the live feed from Sarah Palin's speech was an amazing event here at Palingates! Thank you very much for participating, everybody, it was huge fun!
Today is one of these days when ask myself why I spend so much time investigating Sarah Palin.
Yesterday, the empress had no clothes. Not for the first time! The same happened for example when Sarah looked at the cheat notes on her hand in February 2010 in Nashville and thought that nobody would notice. That was very dumb by her. But I also questioned my judgement for a moment. This woman is nothing else than an immature and pretty mean teenage girl. She is not Presidential. Far from it. She was a lousy small-town mayor who left her town in huge debt when her second term came to an end and who had to hire a city manager because she couldn't handle her job. She is just a bag of hot air.
But there is also the "other Sarah". Backed by Rupert Murdoch and his henchmen at Fox News and Harper Collins, closely connected with the Neocons Bill Kristol and Randy Scheunemann, vindictive and unhinged as always, an unrelenting warmonger, a "political celebrity", moving full steam ahead for the Presidental run: It sounds like a story from the Twilight Zone, but it's real.
Yesterday was not her day. She was a complete mess, her speech was an incoherent ramble which included many questionable claims.
And then we had the open mic incident after the speech. Hilarious. The perfect end of this awful CSU Stanislaus affair.
Strange - didn't the day start so well?
Earlier in the day, Sarah Palin went to the hairdresser, surrounded by TV crews and about five bodyguards - she looked like a cheap version of Madonna! I bet she felt like Madonna.

But it went downhill from then, as we know.
You can watch Sarah's complete speech at the Modesto Bee HERE and witness the disaster yourself.
+++
What news do we have?
We expect to receive pictures later today which were taken by our brilliant reader honestyingov, who was boots on the ground yesterday in Turlock!
We also expect to receive a transcript of Sarah's complete speech at some point, maybe later today. One of our brilliant readers has volunteered. :-)
Please also read AnnetteK's diary on Daily Kos HERE.
We have received a short video clip which was taken by honestyingov during the protest:


Therefore I will update this post later.
+++
Our reader EyeOnYou made a sweet discovery today: Palingates actually received a large shout-out in the SF Weekly blog on May 27, 2010, and everyone missed it!
The SF Weekly referred to THIS POST on Palingates.

Soon, American political journalists will someday be replaced by:

Readers of a story from today's Los Angeles Times have reason to believe the answer is "C."

A Thursday Times story with the headline "Paliln to receive $75,000 for Cal State Stanislaus appearance sources say" is actually a retread from a post on the website "Palingates," run by anonymous anti-Palinists living in Europe.

WOW! I am speechless.
Almost. I would like to repeat what I said in the comments earlier:

The truth is of course, as we have mentioned many times, that only Regina, Kathleen and I are Europeans.

Apart from that Palingates has to offer:

We are not a European blog in the full meaning of the word. We don't deal with European issues, but with American issues. We have only a handful of European readers, but thousands of regular American readers. Maybe we should be more insistent in the future regarding the "European" label, because it's misleading.

However, what I would like to point out is that we are very influenced by European style investigative journalism. It's obvious that the USA could need some fresh ideas. It seems to me that many US journalists have forgotten that soundbites and images and ghostwritten facebook posts are not the "real" news.

The real news is the truth beneath the surface.
+++
UPDATE:
Here is a clip with the excerpt from Sarah Palin's speech where she expresses her outrage about the "Dumpster Divers":


See also the article about this topic in the Huffington Post.
+++
Finally, here are pictures taken by our reader "honestyingov", who was at the protest in Turlock and also had a lot of work with preparations for this day, making signs etc.! A big shout-out to honestyingov! :-)
The "dumpster divers" Alicia Lewis and Ashli Briggs are prominently featured in the photos.
We will be eternally grateful to Alicia and Ashli, because without their initiative, all these revelations during the CSU Stanislaus scandal would not have happened. These two young women managed expose the real character of the Quitter Queen: Greedy, manipulative, unhinged, vindictive - and they made the half-term-Governor REALLY mad. ;-)
More pictures taken by honestyingov in my flickr album.
Click on pictures to get to the larger version.

Ashli Briggs, on the left - Alicia Lewis, on the right