Linda Kellen Biegel, aka Celtic Diva, has two excellent posts about Sarah Palin's book signing at the Elmendorf base in Alaska. Linda has given us was kind permission to cross post them here. 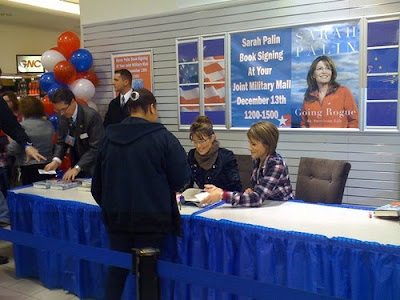 Kim Chatman, who filed the AK Fund Trust Ethics Complaint that should have gone to a hearing by now, decided to take her three teenagers and get some signatures from Palin.

It's been interesting tweeting her phone calls:

Kim reports from Palin book-signing: full military security there including dogs--unusual 4 someone besides POTUS // R they tomato-sniffing?

RT @giacomplex Only first 500 sure of getting books signed. She'll do 2 per person so that's 1,000 books./Doh UR right thx 4 correction

Kim from Elmendorf: Man scared her teenage daughter so she is now covering her Obama shirt w/coat--you know, our Commander in Chief?

Kim from Elmendorf: A friend in line comforted her teenage daughter & supported her wearing the Obama t-shirt--Kim close to getting sig now

And when I say "Kim Chatman" met Palin--yes, I mean the "AK Fund Trust Ethics Complaint" Kim Chatman! She'll give me the pictures later.

Kim said NO WAY were there 2000 people--maybe whole building but most were there to Xmas shop, not see Palin. She says 1000 MAYBE.

Kim and her family went to get something to eat, then she'll call me back and I'll update the post with the details!

More on Palin's Elmendorf book-signing... Why so much security?... Also, sumary by Kim Chatman 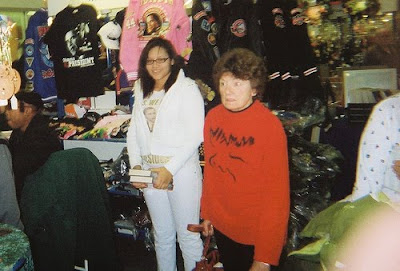 I spent several hours today tweeting Kim Chatman's reports from Sarah Palin's book signing at Elmendorf. Tonight, Kim sent me a summary email (below) and several pictures she took on her cell phone.

A couple of comments before we get into Kim's email:

--During Gryph's and my meeting with Thomas Van Flein on Wednesday, he mentioned that Sarah Palin had received a "threat" a couple of weeks previous. (I almost said "Only one?" I have a number of threats among my emails, as do many of the other Alaska bloggers. And we now know that the Secret Service gets 500 threats a day against President Obama.) I'm guessing this is the justification that Palin is using to a) have these book-signings on base and b) get the large security contingent while there.

--However, I don't believe that those reasons are the "whole truth" when it comes to "why."

I believe it's the money.

For Sarah Palin or her publisher, HarperCollins to duplicate the same kind of logistics support and security she's been getting on the military facilities at a private venue, it would cost thousands of dollars. However, if she continues to have them on military bases, she CANNOT BRING PRIVATE SECURITY. ALL security must be done by the military or federal contractors.

And it's on the taxpayers dime.

So once again, Sarah Palin doesn't mind "government spending" as long as it's to her benefit! 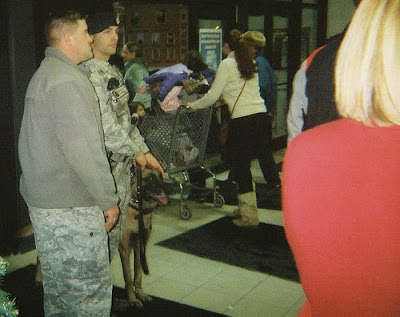 Kim talks about how she feels about all the security...and the shock at her daughter's treatment:

I'm still reliving my experience, ugh! I still don't think there were 2000 people there and I'm still surprised at the reaction of the people who seemed disturbed by Kayla's Obama shirt. An active member of the military in an Air Force uniform asked Kayla why she wore an Obama shirt at a Palin booksigning. When I told her that we were there to get books signed to sell on ebay and that we didn't support Sarah Palin, she got a look of disgust on her face and just kept staring at us.

I learned that many of the people there knew very little about Palin and I could hardly believe it. One couple I talked to said they've only been back in Alaska for three weeks, and they were there just...because. They knew absolutely nothing about Sarah Palin pro or con.

(Note from Linda: I'd like to find whatever rock they must have been living under this last year. What a vacation!)

You can see in the pictures the number of military SPs (Security Police--Air Force designation) that were there. I was absolutely stunned to discover that they had the street to the back of the Exchange blocked off. That just doesn't happen. You would have thought the President was in town. 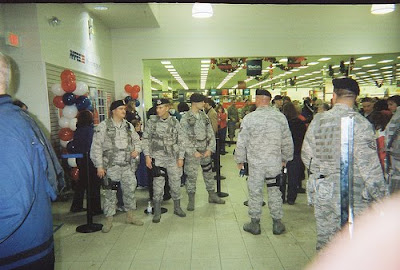 A large number of Security Police were standing guard

I still don't get why the whole family has to travel with her. They, too, are basking in the limelight. Is that normal? Her children looked very bored, and Willow looked snotty...you could tell although she was bored the new lifestyle has truly gone to her head. It was surreal.

When I was in front of Palin, part of me wishes that I would have said my entire name...Kim Chatman. However, at the time, I kept looking at how her children were staring at everyone. I put myself in their position and I believed that REALLY introducing myself would have caused quite an uproar. I realized how it would have negatively effected them after they were already trapped there for hours. They are completely at the mercy of their mother and have to do like everyone else...either go with the Sarah flow or jump off the bus only unlike the adults around them they have no control.

By the way, I almost forgot to mention...People had gifts for her and the kids! She's a millionaire now so you bring gifts?

Kayla asked me on the way home If I thought that people were worshipping her more than God. What an interesting question from a teenager.

If Sarah Palin is so popular, why does she need this level of security?

I find it very offensive that somebody shouted and insulted a young person for wearing an Obama shirt. This event was held at a military base and President Obama is the Commander-in Chief.

According to the ADN, the signing was closed to the general public.

Anyone with access to Elmendorf or Fort Richardson can attend the Anchorage event. A military ID is needed for the Eielson signing, which will be held at the Army and Air Forces Exchange Service (AAFES) shopping center.

"The tour in no way reflects the Air Force's or AAFES' support commercially or politically for Gov. Palin. The event provides an opportunity for Gov. Palin to connect with fans, military members and their families," Eielson said in materials distributed to the news media.

Senior Airman David Carbajal of Elmendorf 3rd Wing public affairs said Palin wanted to have the event on base, and it was Elmendorf's decision to close it for security reasons.

"Being that we were told so late, we don't have time to prepare the base to be open to the general public," he said.

We have to conclude that the person who shouted at the young lady in the Obama t-shirt has military connections...

Sarah Palin should not be allowed to propagate her poisonous agenda on military bases, but as we have come to expect, rules that apply to everybody else don't appear to apply to her. "I do what I want until the courts tell me that I can't!"