Sarah Palin's family values - UPDATE: Chuck Heath was adopted! UPDATE 2 - Sarah Palin did mention something about it in "Going Rogue" 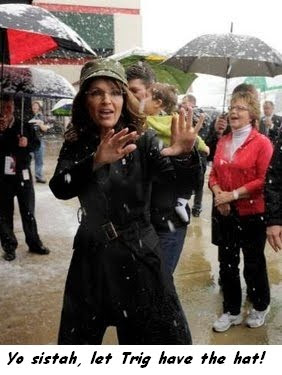 Many people noticed how Trig is being used by Sarah Palin in her "bus" tour. It doesn't matter what time of day or night, it doesn't matter if the weather is bad, Trig makes an appearance in unsuitable clothes, minus his glasses, then he's handed to the nearest aide while Sarah grabs the microphone without a backward glance at her precious gift from God.

Some commentators have talked about how Trig is very important in helping cement Sarah Palin's pro-life credentials. One of Sarah Palin's aides, Jason Recher, even said that people go to book signings to see Trig.

But we're worried about Trig's welfare. We know that he must feel the cold, specially when he's yanked from a nap to make an appearance in bare feet, a diaper and a bare midriff. Trig must be flying with her in order to provide her grand entrances photo ops at the signings. This worries me:

Children with DS often have medical problems such as chronic pulmonary hypertension, frequent infections, and pulmonary vascular overperfusion and injury from existing or previous cardiac defects. These problems all may be viewed as risk factors for HAPE (high-altitude pulmonary edema) and thus result in the rapid development of HAPE at low altitudes. Care should be taken when traveling to even moderate altitudes with children with DS.

We don't know who gave birth to Trig, but we know that Sarah Palin has parental responsibility. In her case, parental irresponsibility seems more fitting. Her favourite child, Piper, has been out of school for weeks now. She told Matt Lauer that she was having trouble catching up after missing so much school during the campaign. She was a year younger. Surely school gets a bit more complicated every year and Piper should have a harder time this year?

Sarah Palin's parenting style is very unorthodox. First under the bus was Bristol, exposed as a five month (no more, no less) pregnant teenager to prove that Trig was Sarah's baby. Apart from Track, all the children old enough to be in school were travelling up and down the country with the campaign circus. Before she was tapped as John McCain's running mate, her children were already clocking many Alaskan airmiles, seemingly changing schools all the time because Sarah Palin couldn't be bothered to live in Juneau on a permanent basis.

Last summer both Sarah and Todd Palin accused David Letterman of cracking jokes about the rape of 14 year old Willow. In order to "protect" their young daughter from the perverted Letterman, they put a big spotlight on Willow, when everybody understood the joke, however tasteless, in a completely different context.

Where are their family values? Their children can be used to get back at people, they don't go to school on a regular basis, don't have a regular bedtime, are constantly exposed to large groups of people in any weather and at unsuitable times.

The job of a parent is to protect and nurture, to provide a secure and stable environment so the children can fulfil their potential.

What we see with the Palins are children who are treated like trained seals in a circus act or used to make a point when it suits their mother's agenda.

Trig has special needs but he's getting a lot less than any child without challenges.

In my book, that's criminal.

Bree Palin has an excellent slide show of Trig in the book tour. 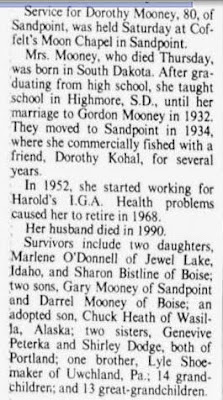 He (Dad) was born in 1938 to the celebrity photographer Charlie Heath, who specialized in shooting famous prizefighters.
(...)

...when Dad was ten Grandpa Charlie moved the family to Hope, Idaho, and started a fishing lure business, while Grandma Marie continued to teach school. Grandma Marie was a Christian Scientist who didn't believe in doctors or medicine, and believed that physical illness was merely a manifestation of the mind.

Dad doesn't talk much about his childhood, but through the years I heard enough muffled conversations between my mom and dad to know that his parents' acceptance of pain must have translated beyond the physical. Dad's childhood seemed to me painful and lonely. 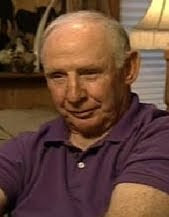 Sports and outdoors were Dad's passion, but his parents thought they were a waste of time. Dad had a choice: he could either abandon his passion or fend for himself. So he rode the bus fifteen miles each day to Sandpoint High School, and hitchhiked home every night after practice. He became a standout athlete, excelling in every sport. He held the school record for the 100-yard dash until 1998 (dad sent the boy who broke it a letter of congratulations), and was recently inducted into Sandpoint's Sports Hall of Fame. Even setting records didn't capture my grandparents' attention, though. Dad worked in a local lumberyard, staying with different families. He went from couch to couch when he couldn't hitch a ride back to Hope, and was virtually adopted by a classmate's kind family, the Mooneys.

Some questions have to be asked:

What does Sarah Palin mean by this passage: his parents' acceptance of pain must have translated beyond the physical.

A father who was a celebrity photographer specializing in shooting prizefighters and who went on to start a fishing lure business didn't show any interest in Chuck Heath's passion for sports and the great outdoors?

Why did Sarah Palin say that he was "virtually" adopted by the Mooneys when Dorothy's obituary clearly states that he was indeed adopted?

In the previous update I said a possible impact of an adoption and the strange family dynamics made you go hmmm.

Having read Sarah Palin's account of her father's childhood and how she made the reference to a "virtual" adoption, it makes you go more than hmmm, it makes you scratch your head and wonder if anything is ever straightforward in this family!

(Click on photos to enlarge)
Posted by regina at 13:20